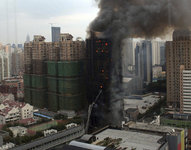 Police in Shanghai and New Delhi investigated separate accidents that killed at least 119 people in incidents that highlighted illegal construction and lax safety rules in the world's fastest-growing economies.

Eight people were detained in China's financial capital after sparks from unlicensed electric welders set off a blaze that killed 53, the official Xinhua News Agency reported. In New Delhi, authorities searched for the owner of a building that collapsed, killing 66 people as workers were constructing an illegal fifth floor, Press Trust of India reported.

Economic growth in China and India has transformed Shanghai and New Delhi into two of the world's most heavily populated cities, with almost 35 million residents combined. Officials pledged to punish those responsible for the accidents, BusinessWeek informs.

China's Ministry of Public Security has promised a thorough investigation into the cause of the accident, which occurred at a building that was undergoing renovation but occupied by several hundred people, including many retired teachers. The government said that the investigative unit will report directly to the State Council, one of China's most powerful government bodies.

The city's chief firefighter said Tuesday that the building was covered in scaffolding made of flammable nylon netting and bamboo. Buildings in much of the city can be seen draped in similar scaffolding.

The devastating fire burned for more than four hours Monday before it was put out at about 6:30 p.m., shocking this bustling city of 20 million and raising troubling questions about the safety of high-rise apartment buildings in a city crowded with new skyscrapers, according to New York Times.