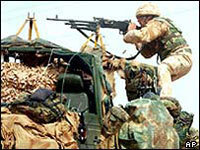 At least eight Taliban fighters have been killed in a failed bid to bomb the main airport and a foreign military base at Jalalabad in eastern Afghanistan.

ISAF said in a statement that its troops and Afghan National Army soldiers killed eight militants but only one was wearing a suicide bomb vest.

"The forward operating base received small arms fire from an unknown number of insurgents and after gaining positive identification of insurgent fighting positions an ANA and ISAF quick reaction force was sent to the area," it added, Sky News reports.

Nato forces said in a statement that the base received fire but initial reports indicated no foreign or Afghan forces were killed. Mr Abdulzai said the area was secure by late morning and that they had killed all the attackers.

In June, militants assaulted the Nato base with a car bomb, rocket-propelled grenades and automatic weapons but did not breach its defences. Eight militants were killed in that attack.

In northern Kunduz province a bomb hidden in a motorbike exploded on a busy street in Imam Sahib district, killing seven people, The Press Association reports.