A Qantas Airbus A380 has been forced to make an emergency landing this morning at Singapore airport after an engine exploded while flying over Indonesia. 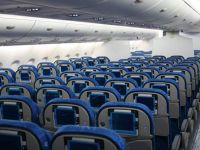 The A380, Flight Number QF32, took off from Singapore's Changji airport at 11.45 local time on route to Sydney, Australia and shortly afterwards (ten to fifteen minutes after take-off), eye witnesses on board reported that an engine exploded with a loud bang and emitted flames, after which the aircraft started shaking.

The crew immediately opted for an emergency landing back at Singapore, flew around for an hour and a half to use fuel and there were no casualties among the 443 passengers and 26 crew.

Qantas has decided to ground its six-strong fleet of A380s, the flagship of the European Airbus programme after this first incident after the launch in 2007.A Qantas spokesperson issued the following statement:  "We do take our safety reputation and our safety standards unbelievably seriously. And we're not going to take any risks with passenger safety - and as a precaution, we're suspending the flights of the A380 aircraft until we're comfortable that we understand the reasons for this."