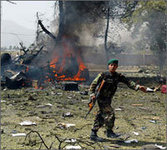 Five charred bodies were recovered from the wreckage of a cargo plane Wednesday that slammed into a mountaintop east of Afghanistan's capital Kabul with eight people aboard.

The plane went down east of the capital shortly after take-off from Bagram Air Field, the main U.S. military base in Afghanistan, at about 8 p.m. (1530 GMT) Tuesday. The cause of the crash wasn't immediately known. Weather conditions were clear at the time, The Associated Press reports.

NATO helicopters and members of the Afghan National Security Forces were searching for the wreckage, according to a NATO statement. The cause of the crash was unclear.

The plane was a civilian version of the C-130 transport aircraft used by the military for cargo, the NATO statement said.

Gen. Zahir Azimi, the Afghan Defense Ministry spokesman, said the plane went down near Pul-i-Charkhi, east of Kabul. The city lies in the middle of a circle of mountains, and when planes reduce altitude as they are coming in for a landing they run the risk of crashing into the surrounding peaks, New York Times informs.