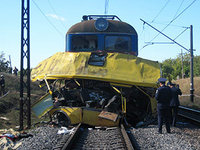 A passenger bus collided with a train locomotive in eastern Ukraine on Tuesday, killing at least 38 people, according to Ukraine's Emergency Situations Ministry.

The accident occurred at around 9:30 Tuesday morning local time in the Dnipropetrovsk region, the ministry said. At least 11 people were taken to the hospital, many in critical condition, New York Times says.

The bus attempted to cross the track, ignoring a siren that indicated an oncoming train, according to local railway officials.

Rescuers and investigators are working at the scene of the crash, they said.

"The driver of the bus broke traffic laws by driving through a red light before colliding with the train," Lyudmila Bashmakova, a spokeswoman for the regional traffic police, said, Aljazeera informs.