240 passengers rescued from ferry in the Baltic Sea 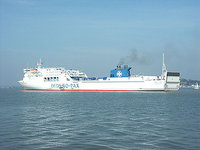 Nearly 240 people were rescued from a ferry in the Baltic Sea in the early hours of Saturday after an explosion on the ship set it on fire. Around 20 people were injured, largely from smoke inhalation, three badly enough to be taken by helicopter to hospital, while rescuers said many were traumatised by the experience.

Authorities in Cuxhaven said there was an explosion at around midnight on the upper deck of the Lithuanian ferry the Lisco Gloria.

Six ships went to the scene to help, including the ferry Deutschland, onto which the passengers were transferred and then taken to Kiel, arriving at around 6 am, according to The Local.de.

Authorities say other ships rushed to the scene to help evacuate the passengers and crew shortly after the accident. Three people were taken to hospitals and the others were being taken back to Kiel on another ferry.

The cause of the accident wasn't immediately clear. The ship, which was in Danish waters, was still ablaze early Saturday, The Canadian Press reports.