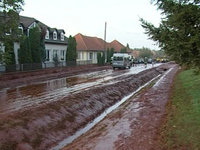 Hungary has declared a state of emergency after toxic sludge burst from a chemical plant, killing three adults and a child of three.

More than 120 people were injured in what one official yesterday called "an ecological disaster" that may contaminate the Danube and other key rivers. Several towns were engulfed in 35.3 million cubic feet of putrid red slime spilled from the reservoir at the Ajkai Timfoldgyar plant, 100 miles from Budapest, according to Mirror.

MAL Rt., the Hungarian Aluminum Production and Trade Company that owns the Ajkai plant, said that according to European Union standards, red sludge is not considered hazardous waste.

The company also denied that it should have taken more precautions to shore up the reservoir, a huge structure more than 1,000 feet (300 meters) long and 500 yards (450 meters) wide.

Clearly angered by the company's suggestions that the substance was not hazardous, Interior Minister Sandor Pinter, snapped: "They should take a swim in it and then they'll see.", The Associated Press reports.