Pakistan: US act of war?

Sources in Pakistan claim that US helicopters have attacked targets inside Pakistan, murdering 30 people. The attack took place on Friday and has been confirmed both by Pakistani and US military sources. However, this time did ISAF violate its agreement? There are those inside Pakistan who claim it is an act of war. 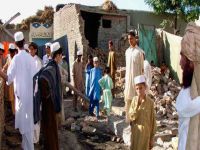 Dawn newspaper in Pakistan claims that US military sources confirm the attack last Friday on 30 militants belonging to the Haqqani Network, who had crossed into Afghanistan to attack the Combat Outpost Nazirah in the Tani District of Khost, eight miles inside Afghanistan. This was the sixth such attack since the end of August.

The International Security Assistance Forces crossed the border, pursued the insurgents to their base inside Pakistan and killed 30 in an air attack by assault helicopters. Further attacks from drones at the weekend claimed four more lives, making 19 attacks in 24 days inside Pakistan.

It is unclear as yet as to whether all those killed were militants, or innocent civilians and it is also unclear how far inside Pakistan they were. The USA claims that it has an agreement with the Pakistani authorities to hit targets up to six miles inside Pakistan.

ISAF spokesperson Master Sergeant Matthew Summers claimed that the ISAF forces acted within their rules of engagement because they are allowed to pursue forces across the border "if they are engaged in fighting or under attack" with Taliban or Al Qaeda and can go deeper to pursue senior operatives such as bin Laden, Mullah Omar or Ayman al Zawahiri.

Pakistan, for its part denies any such agreement. Therefore has an act of war been committed? There are many in Pakistan who claim that it has.