Nicaraguan diplomat found with his throat slashed in his Bronx apartment 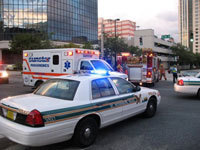 A Nicaraguan diplomat was found dead in his Bronx apartment with his throat slashed yesterday when his driver came to pick him up for the UN General Assembly meeting, police sources said.

The body of Cesar Mercado, 34, was found shortly after 10:30 a.m. when his driver opened the door of his Grand Concourse apartment and saw him on the floor in a pool of blood, cops said.

Investigators are probing the possibility that the killing was caused by a gay relationship gone wrong, police sources said, New York Post reports.

The victim had been working in New York for about eight years and was the highest-ranking official at the consulate, said an official at the Permanent Mission to the UN who declined to give his name, Bloomberg says.

Authorities say the body was discovered just inside the door of the man's sixth-floor apartment. The door was ajar. A knife was recovered at the scene.