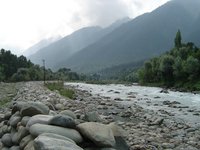 At least 15 children died and several were reported missing when a school van plunged into the Jhelum river in Garhi Dupatta near Muzaffarabad, capital of Pakistan-administered Kashmir.

District administration officials said over 40 people, including 30 children, were in the vehicle. The children were from an orphanage while the remaining people were staff members who were on their way to attend a party in nearby Garhi Hattian area, Thaindian says.

The ages of wounded and deceased children range from ten to 12. The relief efforts are still in progress on the spot. According to school sources, the most of the children were orphaned in 2005 earthquake.

According to preliminary reports, the accident occurred owing to the negligence of the driver, as a school guard was driving the van and was busy on his phone when the accident happened, The News International informs.