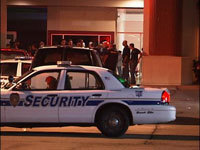 Four people are dead after a woman opened fire at a flat and then in a hospital in Germany last night before police shot her dead in a hail of bullets.

A child is among the victims at the St. Elisabeth Hospital in the town of Lörrach in Baden-Wuerttemberg - not far from the site of the Winnenden massacre in March last year when teenaged gunman Tim Kretschmer killed 15 people with his father's handgun before taking his own life.

According to the local Badische Zeitung newspaper there was a 'loud explosion' around 6pm local time in a building opposite the hospital, Daily Mail reports.

Police in the town of Loerrach said Monday that the shooter was a 41-year-old attorney whose name they did not release.

The woman is alleged to have killed the two in her apartment - which also served as an office - and then run across the street to a hospital where she killed a male nurse before being killed herself in an exchange of gunfire with police.

Police say the nurse had stab wounds and gunshot injuries to the head.

Police in Loerrach, just north of the Swiss city of Basel, are still trying to figure out a motive for Sunday's shooting, The Associated Press reports.