Passenger bus plunged into a river in central India, 22 killed 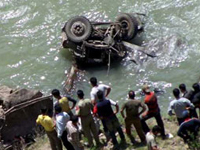 At least 22 people were killed when a passenger bus plunged into a river in central India, police said Thursday.

Twenty-five others were injured and taken to a local hospital. Police are still searching for three missing passengers.

The accident took place late Wednesday when a private bus, on its way to Indore via Chapra from Nemawar, with around 80 passengers on board skidded off and fell into the overflowing Bagdi river at Khategaon village.

'Eighteen bodies have been recovered but more than 30 people are still missing. We have deployed divers and rescue teams to reach the people who are believed to have been swept away by the river water,' Ujjain Commissioner T. Dharma Rao said, Sify reports.