Terror struck Pakistan's cultural hub of Lahore as a pair of suicide bombers attacked a famous Sufi shrine packed with thousands of worshippers, killing at least 43 people, including women and children, and injuring 180 others in the latest in a slew of attacks across the country. 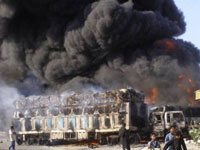 It was the second assault on a religious site in the city in recent months – an assault on members of the minority Ahmadi sect in late May killed 94 people – and underscored how extremists are determined to bring their bloody campaign to the heart of Punjab, Pakistan's most populous and powerful province, The Guardian reports.