Militants armed with guns and grenades attacked two mosques of the Ahmadi sect of Islam in the Pakistani eastern city of Lahore today, killing 20 people. 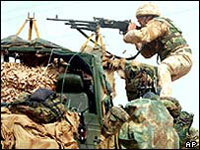 Attackers took up positions in one of the minarets of a mosque in the city’s Garhi Shahu area and threw grenades at armed policemen who tried to move in, Pakistani television channels reported from the scene.

At least 30 people were injured in the twin strikes, Faisal Jalal, a spokesman for the Edhi rescue service, said by phone from Lahore, BusinessWeek reports.

Police officer Imtiaz Ahmad said several attackers are inside and are thought to be holding hostages.

Outside the other mosque several miles away, a witness complained of police inaction when the attackers struck. "I asked the policeman to open fire.

He told me he could not because he only had four bullets in his gun," said Ghalib Hussain, The Press Association says.