The head of a luxury train company says the death toll has risen to three after a derailment in South Africa. 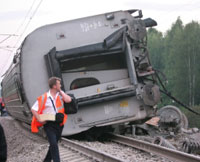 Fifty-five foreign passengers and 30 staff were on the Rovos Rail train heading from Cape Town to Pretoria when 16 carriages slid down the tracks in a deadly pile-up on Wednesday, as the locomotive was being changed at a station.

Two women died in the crash, including one who was four months pregnant and went into labour. A third woman later died from her injuries, according to Rovos Rail. All three were working on the train. Five people were reported to be in a critical condition.

The passengers were mainly from the United States, but also included Britons, French and Germans.

Rovos Rail operates two vintage trains on routes across the continent, billing itself as "the most luxurious train in the world". The company runs a Cape Town to Cairo trip costing 56,000 dollars, Africasia reports.