A Tu-204 passenger jetliner crashed near Moscow’s Domodedovo Airport when performing an emergency landing. There were only eight crewmembers and no passengers on board the Hurghada-Moscow aircraft. 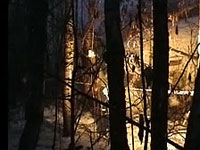 “The Yu-204 plane of Aviastar Tu Airlines performed an emergency landing in the forest one kilometer far from a runway of Domodedovo Airport,” Elena Galanova, the airport’s spokeswoman told Interfax.

All of the eight crewmembers survived the landing, but were hospitalized with severe bodily injuries. Three of the crew are in critical condition.

When landing in the forest, the plane lost one wing; the fuselage cracked in two places. No fire erupted on board the liner.

The plane left Domodedovo for the Egyptian resort city of Hurghada at 4:00 a.m. (01:00 GMT) on Sunday, but had to return to Moscow two hours later after smoke was detected in the cabin. Later, it resumed its flight.

The same plane, with only eight crew members onboard, made a belly landing in woodland near Moscow's Domodedovo Airport at 3:45 Moscow time [0:45 GMT] on Monday, while returning from Egypt, RIA Novosti said.

"These events are in no way connected," the spokesman said.