At least 51 people fell victims to an earthquake of 6.0 magnitude struck early Monday in eastern Turkey, officials in the region said. 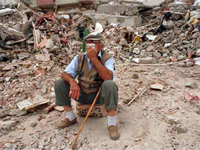 One village was largely destroyed and four others were heavily damaged, the officials said. A second quake with a 5.6 magnitude hit the same area, among scores of aftershocks.

According to Turkey’s Kandilli earthquake observatory, the epicenter of the quake, which struck three miles underground at 4:32 a.m. local time, was 61 miles from the town of Elazig.

There were no people still trapped under debris by Monday night, after rescue operations that lasted for hours, Mr. Erol’s office later announced. Emergency officials put the number of injured at 34.