A passenger train derailed near a train station in Washington, D.C. on Friday, officials said. 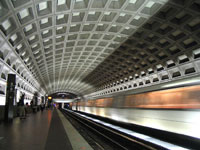 The six-car Red Line train derailed around 10.13 a.m. local time near Farragut North station, according to a Metro spokeswoman. She said the front wheels of the lead car came off the track, Thaindian.com reports.

According to The Associated Press, spokeswoman Bessy Guevara says according to a preliminary report, the front wheels of the train's first car slipped off just after 10 a.m. Friday.

Authorities are trying to get passengers off the train.

Speaking outside the station, 51-year-old passenger Wendy Bogart of Washington says as they arrived at the station the lights and fan went off, but the train operator said "Don't panic... We have to re-energize the third rail." She says she felt nothing.