An Ethiopian Airlines plane with 90 passengers on board crashed just after taking off from Beirut International Airport. 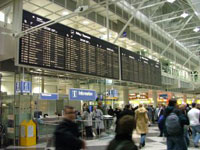 Lebanese officials say the plane crashed into the Mediterranean during stormy weather. An early report from the Guardian stated that officials said 85 people were on board. Voice of America reported 90 "passengers". Aljazeera reported 83 passengers and up to seven crew.

The plane was a Boeing 737 traveling from Beirut to Addis Ababa, the capital of Ethiopia, Digital News report.

Flight ET409, a Boeing (BA.N) 737-800, heading for Addis Ababa, disappeared off the radar some five minutes after taking off at 2:37 a.m. (0037 GMT) during a thunderstorm and rough seas. Lebanese President Michel Suleiman said he did not think the plane had been brought down deliberately.

"As of now, a sabotage act is unlikely. The investigation will uncover the cause," Suleiman told a news conference.

Twenty-one bodies have so far been recovered near the crash site three-and-a-half km (two miles) west of the coastal village of Na'ameh. Eighty-three passengers and seven crew were on the flight, Transport Minister Ghazi al-Aridi said at the airport, Reuters unforms.

"We (the authorities) have ruled out foul play," Suleiman was quoted by Lebanese media as speaking at a press conference.

Lebanon's Public Works and Transport Minister Ghazi Aridi told local television that bad weather conditions are probably the main reason for the crash as the Ethiopian airliner was flying in storms.

A Lebanese committee was set up to investigate the crash, he said, adding that the committee will cooperate with a French team to uncover the details of the disaster, Xinhua reported.

He said the Lebanese Armed Forces and the UN maritime task force serving off the Lebanese coast were taking part in the search-and-rescue operation, Bernama informs.