Virginia state troopers surrounded a wooded area in Appomattox where they said they believed a man suspected of killing eight people was hiding late Tuesday. 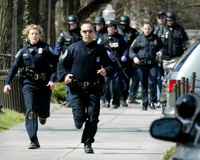 A massive manhunt was launched early Wednesday after they discovered seven bodies at a rural home and another victim nearby.

The suspect had been tracked down to woods west of the historic town of Appomattox.

"State and local law enforcement continue their search efforts Tuesday night in Appomattox County for a gunman responsible for killing eight people earlier in the day," Virginia State Police said in a statement.

"More than 100 deputies, officers and state troopers will continue working through the night to locate and apprehend the armed subject."

The suspect, named as Christopher Speight,39, was thought to be alive, but snared in a police cordon as night fell.

The suspect earlier shot at a helicopter called in to help with the search. At least four shots hit the craft forcing it to make an emergency landing, officials said.

A nearby residence was evacuated as the manhunt grew ever tenser.

The incident unfolded around noon on Tuesday when a deputy from the Appomattox sheriff's office responded to an emergency call about an injured man lying on a country road.

The wounded man was transported by Med-Flight State Police helicopter to Lynchburg General Hospital, where the he later died.

The other victims were male and female, according to police, who did not give a motive for the attack, although local media reported the wife and the son of the suspect were among the dead.

The office of recently-elected Virginia governor Robert McDonnell described the shootings as a "horrific tragedy" .

The shooting come just under two years after Virginia was rocked by the fatal shooting of 32 people at Virginia Tech by gunman Seung-Hui Cho.

Appomattox, a small down in the south of the state, is better known as the venue for the final battle of the American Civil War.