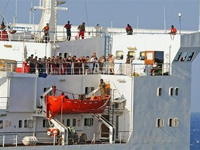 The tanker and its 28-member crew was released on Monday after pirates received a $5.5 million ransom, believed to be the largest sum paid to free a hijacked ship.

The crew members — 16 Filipinos, 9 Greeks, 2 Ukrainians and a Romanian — were all unharmed, European naval officials said in a statement.

But disputes over the delivery of the ransom and how to divide it touched off fighting among pirates, according to the European Union Naval Force and spokesmen for the pirates. Skiffs carrying rival bands of marauders traded fire on Sunday, even prompting one of the pirate groups to radio naval ships for help.

A pirate spokesman, Abdi Elmi, said that one pirate was shot dead Monday during a dispute over how to share the money, but he added that “it was friendly fire and accidental, and we buried him today.” Another pirate, who identified himself as Ahmed, said some of the hijackers had quarreled because they had been expecting a larger ransom than the sum that had been delivered by the owners of the tanker.

The owners, Maran Tankers Management, said in a statement that they were “delighted” that the ship had been released, but declined to provide any details about the negotiations that led to the ship and crew’s release.

The ship, carrying an estimated two million barrels of crude oil, was hijacked on Nov. 29 as it navigated past the coast of Somalia, a notorious hunting ground for pirates.

Last year, pirates staged a record number of hijackings and attacks, according to the Piracy Reporting Center of the International Maritime Bureau. The bureau said 214 vessels were attacked and 47 hijacked by Somalis, who have turned to piracy as a relatively lucrative way to make money in a country whose government barely functions and whose economy is in a shambles.