Rescuers from all over the world came to the ruined capital of Haiti, ready to hard and intensive search of earthquake survivors among thousands of corpses in the devastated country. 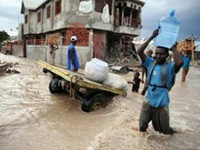 Amid mounting desperation over shortages of medicines and food, and with officials warning the overall death toll may top 100,000, many people who escaped with their lives spent a second night on the streets.

Schools, hospitals, hotels, ministries and the presidential palace lay in ruins and people caked in blood and dust pleaded for help as they lay trapped beneath mountains of concrete in Port-au-Prince.

Casualty figures were impossible to calculate, but Prime Minister Jean-Max Bellerive said the final death toll from the magnitude 7.0 quake could be "well over 100,000."

President Rene Preval, whose home and official palace were destroyed, said 50,000 could be dead.

US Secretary of State Hillary Clinton, who cancelled an Asia trip and returned to Washington, said the death toll would reach "tens of thousands" and warned of an unimaginable disaster in a country which is already the poorest in the Western hemisphere.

Teams of civilian and military experts arrived the airport which was operating even though the control tower collapsed.

Canada, France, Germany, the Netherlands, Russia and Spain all offered teams. Australia, Britain and Japan were among the countries who made multi-million dollar aid pleges.

The Red Cross launched a 10-million-dollar appeal, the World Food Programme offered 15,000 tonnes of food and the World Bank said it would provide an extra 100 million dollars in aid.

The earthquake was the latest tragedy to hammer Haiti, which has been scarred by years of unrest, crime, political tumult and natural disaster.

The quake turned thousands of buildings into rubble. Among them was the UN mission headquarters and a major hotel where 200 tourists were missing.