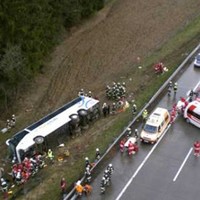 More than 50 people were aboard when the bus travelling between the town of Arequipa and the town of Santo Tomas, veered off the road and tumbled 200 meters down a mountainside, police said.

The accident happened shortly after daybreak Friday on a stretch of mountain highway 610 kilometers southeast of Lima that was so remote the nearest village didn't have a doctor, MRT online reports.

The injured were taken to medical facilities in Velille, Espinar and Santo Tomas, CPN Radio and RPP reported. Police, meanwhile, were continuing their attempt to recover bodies and rescue possible survivors from the crash site.

Heavy rain and snow had fallen in the area prior to the accident, leaving the highway in "very bad condition," a firefighters' spokesman told RPP.