Slick and blustery Christmas is expected in the central United States as snow will be coupled with blinding winds in western areas and freezing rain in the east, a forecaster predicted Thursday. 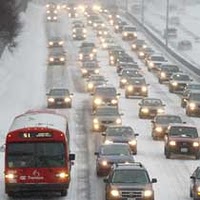 The forecast called for snowfall of 12 inches or more through Saturday, with blizzards in several northern areas.

Northeast Nebraska, northwestern and north-central Iowa, northeastern portions of the Dakotas and Minnesota are expected to get heavy snowfall through the weekend.

Freezing rains are expected to cover the blanket of snow, making roadways dangerous for holiday travel Christmas Eve on Thursday night. Burgio said strong winds will develop on Christmas on Friday and continue into the night, Reuters reports.

News agncies also report, a foot or two of snow was possible in some areas by Christmas Day.

"As we go into Christmas Day, we expect some very heavy snow and some blizzard-like conditions across parts of the upper Midwest," said Bruce Sullivan, a National Weather Service forecaster.

"With winds expected to increase to over 30 mph, in some spots to over 40 mph, that could produce some white-out conditions for travelers," he said.

The NWS said travel would be extremely dangerous in affected areas through the weekend and that anyone on the road should take a winter survival kit, including a flashlight and water, NPR reports.

It was also reported, road conditions were particularly bad in northwest Kansas, where 8 inches of snow had fallen overnight. Interstate 70 was completely ice-packed in western Kansas.

"It's kind of hard to stay on the roads. You've got to go slow," Jason Juhan, a clerk at the Love's truck stop in Goodland, Kan., said Wednesday. "People are just trying to get through and get to where they need to as fast as they can."

Still, he saw an upside: "It's been a few years since we've actually had a white Christmas out this way," ABC News reports.