In a central Iranian city opposition protesters were attacked by security forces, beating men and woman and firing tear gas. People gathered for a memorial commemorating the country's most senior dissident cleric, who died this week. 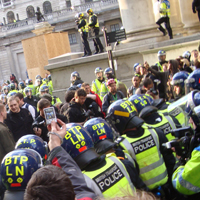 The death on Sunday of the 87-year-old Grand Ayatollah Hossein Ali Montazeri, a sharp critic of Iran's leaders, gave a new push to opposition protests, which have endured despite a heavy security crackdown since disputed presidential elections in June.

His memorials have brought out not only the young, urban activists who filled the ranks of earlier protests, but also older, more religious Iranians who revered Montazeri on grounds of faith as much as politics. Tens of thousands marched in his funeral procession in the holy city of Qom on Monday, many chanting slogans against the government.

Wednesday's violence erupted when thousands tried to gather for a memorial to Montazeri at a mosque in the central city of Isfahan, 200 miles (325 kilometers) south of Tehran. They were met by a large force of riot police and Basijis, which stormed the crowds to disperse them, according to a witness and opposition Web sites, The Associated Press reports.

It was also reported, the government has responded by harassing two reformist clerics who could replace Montazeri, as well as stripping the opposition’s top political figure – Mir Hossein Mousavi – of his sole official post.

In Isfahan, pro-regime basiji militiamen used batons, chains, and stones to beat mourners who gathered at the city's main mosque to remember Montazeri, the spiritual mentor of the Iranian opposition, whose websites reported the clashes.

“While people were reciting the Quran [in the mosque], plainclothed forces attacked them and threw tear gas into the mosque yard and sprayed those inside with pepper spray after they closed the doors,” reported the reformist Parlemannews. “They severely beat the people inside,” then doused the clerical speaker with pepper spray and arrested him.

“Tens of thousands gathered outside for the memorial but were savagely attacked by security forces and the basijis,” witness Farid Salavati told the Associated Press. He said that dozens were injured as riot police and vigilantes clubbed and kicked men and women alike – some in the face – and arrested 50 people who had gathered to mourn the grand ayatollah, The Christian Science Monitor reports.

In the meantime, the increasingly radical demonstrations since the disputed election of Mr Ahmadinejad in June have weakened his authority but also forced conservative opponents to rally behind the regime.

Voices which previously criticised his wilder tactics of confrontation with the West over Iran's nuclear programme have been silenced in the wake of his public backing by the supreme leader, Ayatollah Ali Khamenei.

"He's dispensable for the regime," said Mustafa Alani, of the Gulf Research Centre. "If the survivability of the regime depends on removing him they will remove him. But I don't think we will reach that point in 2010.

"The problem for the regime will persist but I don't think the movement will generate enough pressure," Telegraph.co.uk reports.