Heavy rainstorm in Kingston caused aero-accident Tuesday night. Passangers of an American Airlines flight survived it, though dozens of people got injured. 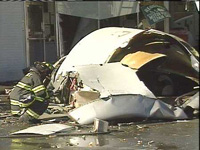 Jamaican Information Minister Daryl Vaz said "the airplane is broken in two" and that 29 people were taken to Kingston Public Hospital. He said some others were taken elsewhere and treated at the airport. All passengers were off the plane that normally carries 140 people plus the crew, said American Airlines spokesman Charley Wilson.

Those getting off the plane were bleeding, mostly from the upper parts of their bodies. Officials did not know the extent of the injuries.

Passenger Pilar Abaurrea described a chaotic scene as the plane skidded along the runway in heavy rain.

"All of a sudden, when it hit the ground, the plane was kind of bouncing, someone said the plane was skidding and there was panic," Abaurrea of Keene, N.H. said in a telephone interview.

Abaurrea said she had pain in her neck and back from the impact and her husband had pain in a shoulder from falling luggage, but were otherwise unhurt. "I'm a little bit shook up but OK," she said.

Abaurrea said the entire flight was very turbulent, with the crew being forced to halt the beverage service three times before finally giving it up. Just before landing the pilot warned of more turbulence but said it likely wouldn't be much worse than what they had experienced so far, she said.