Thieves of the Nazi's Motto Detained

Polish police arrested five men on Monday for stealing the metal sign that hung over the former Nazi death camp Auschwitz, and said they were common thieves, not neo-Nazis. 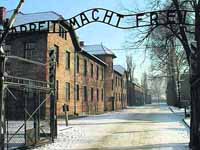 Thieves of the Nazi's Motto Detained

Last Friday's theft triggered widespread outrage, especially from Israel and Jewish groups, amid fears of a political motive. The sign, which carries the German motto "Arbeit macht frei" ("Work makes you free"), is a powerful symbol of the Holocaust committed by the Nazis against the Jews. The police said it had been cut into three pieces.

"None of the five suspects is a member of a neo-Nazi group," said Andrzej Rokita, district police chief in the southern Polish city of Krakow, which is near the site of Auschwitz.

Police said the suspects, aged between 20 and 39, had previous convictions for various crimes including robbery and physical assault. One of them ran his own construction firm. Still, the motif to steal exactly this sign remain uncovered.

Authorities had made recovering the sign a national priority and the museum that runs Auschwitz offered a reward worth nearly $40,000. Police said they had received more than 100 calls offering information.

Some 1.5 million people, mostly Jews, perished at the death camp during Nazi Germany's occupation of Poland in World War Two. Arriving prisoners used to enter via a small iron gate topped by the sign.

More than 200 hectares (500 acres) of the former death camp became a museum after the war ended.

Jewish groups welcomed the news the sign had been recovered.

In January, Poland marks the 65th anniversary of the camp's liberation by the Soviet Red Army.