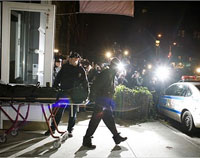 Police say four men were found dead at an apartment in an upscale area of Manhattan.

The killings were reported at 1:45 p.m. Thursday at a building on the Upper West Side. One woman was taken to a hospital.

No arrests have been made. Police say three bodies were found fatally shot in the home. One other body was found in a backyard.

Police are investigating whether the man found in the yard was the gunman and fell to his death while fleeing the scene.

The building is on a busy commercial strip in a tree-lined residential neighborhood a few blocks from Central Park and the American Museum of Natural History.