Italian Prime Minister Silvio Berlusconi was released from hospital today after spending a fourth night under observation after an assailant broke his nose with a model of the Milan cathedral. 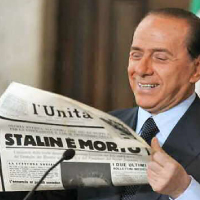 With a small bandage on his nose and a large compress on his left cheek, Mr Berlusconi, 73, was seen leaving the hospital in a black sedan, waving to reporters through the rear window.

Massimo Tartaglia, 42, an electronics engineer with mental problems, threw a heavy souvenir statuette of the Duomo at Mr Berlusconi's face, leaving him with a fractured nose and two broken teeth. He later apologised to Mr Berlusconi by letter but told police the controversial populist Prime Minister was "ruining Italy".

Doctors say the normally ebullient Mr Berlusconi, is still in pain and having difficulty eating properly, and there are fears for the long-term impact of the attack on his morale, Times Online reports.

It was also reported, Wednesday, a judge remanded his alleged attacker Massimo Tartaglia, 42, in custody.

He rejected a plea from his lawyer that he be transferred from police custody to a psychiatric hospital temporarily.

The judge said Tartaglia was still capable of carrying out a similar act, Ansa reported.

Also on Wednesday, security guards on the seventh floor of the hospital where Mr Berlusconi was staying apprehended a man who said he wanted to speak to Mr Berlusconi.

The attack has sparked debate in Italy, where his political party said some websites had preached hatred for Mr Berlusconi and praised the attacker for his actions, BBC News reports.

Meanwhile, doctors have ordered Berlusconi to rest for at least two weeks, which means he will miss political events in Italy and abroad. He had planned to join 100 world leaders this week in Copenhagen for United Nations climate-change talks. He will also probably skip his traditional end-of-year press conference.

Berlusconi may go to the Ars Medica clinic in Gravesano, Switzerland, “in coming days,” Le Matin newspaper reported, citing the mayor of the town, Carlo Zoppi. Berlusconi underwent plastic surgery there in 2003, the newspaper said. The clinic’s spokesman Jerome Puginier declined to comment, Le Matin said. The mayor declined to speak by phone, according to his office, Bloomberg reports.