A young Italian man was overpowered by police guards as he attempted to enter Silvio Berlusconi's hospital room in the second security scare in a matter of days. 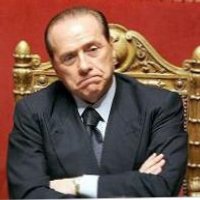 The 26-year-old managed to gain access to the building at around 2am on Wednesday and took a lift to the eighth floor where the prime minister was recuperating.

Anti-terrorism police confronted the intruder and tackled him as he got within yards of the Italian leader's room.

He was unarmed but police found hockey sticks and two kitchen knives in his car, which was parked in a car park beneath the hospital.

Anti-terrorism officers said the unnamed man appeared to be suffering from "psychological problems" and had "wanted to pay a visit" to Mr Berlusconi, Telegraph.co.uk reports.

In the meantime, Berlusconi spent a troubled night with pain in his neck, his spokesman said.

His night was "worse than previous ones," spokesman Paolo Bonaiuti said, though he attributed Berlusconi's unease partially to his enforced absence from work.

"All his life he has been a very hard-working man. To try to keep him still, to keep him off work, is a titanic task," Bonaiuti said, CNN International reports.

It was also reported, Prime Minister Berlusconi was attacked Sunday by a man wielding a statuette after a rally in Milan. Police have arrested a 42-year-old suspect (Massimo Tartaglia) for the attack, and say he also has a history of mental illness.

Italy 's interior minister (Roberto Maroni) said Sunday's suspect was carrying pepper spray and a crucifix as he waited for Mr. Berlusconi along with a crowd of supporters. The suspect said he acted alone and without political motive.

Mr. Berlusconi was shaking hands and signing autographs when his attacker hurled a souvenir statuette that struck the prime minister's face.

On Tuesday, a doctor at San Raffaele hospital in Milan said the 73-year-old Italian leader was still in pain and having trouble eating, Voice of America reports.