20 people killed in a car bomb blast near the home of a Pakistani provincial government on Tuesday, a police official said. 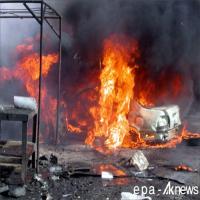 Militants who want no Western influence in nuclear-armed Pakistan, which Washington sees as critical in the battle against Islamist hardliners in Afghanistan, have not let up attacks, despite security crackdowns in their strongholds.

The blast took place in the town of Dera Ghazi Khan in a market, the kind of site frequently targeted by militants seeking to inflict maximum casualties.

"It was near a market and several shops have collapsed," said Tariq Gurmani, a resident of the Punjab province town, adding he had seen several wounded people, The New York Times reports.

It was also reported, the attacker detonated his explosives outside the house of the lawmaker, who was not at home at the time. Most of the dead and injured were people shopping or working at the market. It was unclear whether the bomber targeted the politician's home or the market.

The attack badly damaged the house and several nearby shops and buildings, including a mosque and bank.

As night fell, people searched through the debris for survivors trapped under the rubble.

"The whole market has collapsed," said Raza Khan, a local resident. "There is smoke and people running here and there."

News agencies also report, the district has a unique geographical position as it borders North-West Frontier Province and Baluchistan Province and is known as the gateway to Punjab, said Muhammad Mohsin Khan Leghari, a member of the Provincial Assembly who represents the Dera Ghazi Khan district.

Recently there have been concerns that militants from the tribal regions of North-West Frontier Province have been using Dera Ghazi Khan as a route to enter Punjab.

“I have been asking the government to protect the border areas,” Mr. Leghari said.

He said just last month two trucks, laden with more than 60 tons of explosives, were seized by the authorities as they entered Dera Ghazi Khan from the North-West Frontier Province.

Concerns about rising militancy and extremism have surfaced in recent years in southern Punjab, where feudal influence is still powerful and most of the population is impoverished and uneducated, The New York Times reports.