Silvio Berlusconi to Be Released from Hospital Wednesday 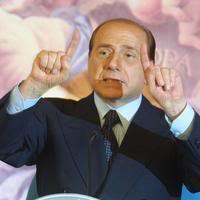 Silvio Berlusconi to Be Released from Hospital Wednesday

Berlusconi, 73, should refrain from public activities for two weeks after his release, Alberto Zangrillo said.

The prime minister suffered broken teeth and a fractured nose in the Sunday attack, in which a man threw a souvenir replica of Milan's cathedral at Berlusconi and hit him in the face.

Zangrillo said he doesn't believe Berlusconi will suffer permanent scars and that his teeth can be reconstructed, CNN reports.

It was also reported, a man with a history of psychological problems bloodied Berlusconi's face Sunday with a souvenir statuette of Milan's Duomo cathedral as the leader ventured into the crush of a political rally in the northern Italian city.

Italy's debate follows a familiar pattern: How much security is necessary when politicians seek to mingle with their public?

"The security failed because, as usual, Berlusconi did what you should never do: Seek direct contact with the crowd," said Andrea Nativi, a researcher at the Rome-based Military Center for Strategic Studies.

Public appearances and leaders who walk the streets unprotected are a magnet not just for terrorists but for political protesters, publicity seekers and people with psychological problems.

U.S. President Barack Obama has acknowledged "a screw-up" last month when two uninvited guests managed to get into a White House dinner and came into contact with the U.S. leader. Three uniformed Secret Service officers have been placed on leave while the security breach is investigated, The Associated Press reports.

The attack, which shocked Italians, came amid an increasingly tense political atmosphere. Berlusconi has for months denounced a "climate of hatred" he says surrounds him as he fends off a sex scandal and judicial troubles.

The bloody image of Berlusconi has created sympathy, but groups praising Berlusconi's assailant mushroomed on Facebook in the aftermath of the attack.

Get-well wishes from Italians and foreign officials have poured in after the attack, including from the U.S. Secretary of State Hillary Rodham Clinton and French President Nicolas Sarkozy.

"This brutal and pointless attack has shocked us all. I wish him a swift recovery and a rapid return to the leadership of Italy," EU president-to-be Herman Van Rompuy said Tuesday, The Associated Press reports.