Tuesday morning a wave of car bombings rocked Baghdad . M ore than 100 people are killed, dozens of others are wounded . It was the worst violence to hit Baghdad, since October, when two massive car-bombs killed 155 people. 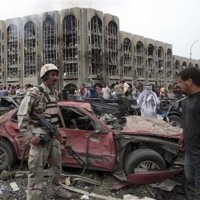 Ambulances ferried the injured to hospitals across Baghdad, after a wave of powerful car-bombings struck at least four neighborhoods within minutes, rocking the city.

Iraqi TV showed a billowing plume of black smoke hanging over the site of one bombing, as firemen and rescue workers helped the wounded and picked through debris. The twisted and smoking carcass of a car bomb was visible in the street, next to other ruined vehicles, Voice of America reports.

It was also reported, o ne bomb apparently targeted a courthouse in Mansour district, in central Baghdad. Another bombing was reported near Mustansiriya University, one of the country's most prominent colleges. Another one, in Waziryia, detonated close to the Judicial Institute, a complex where judges are trained.

In the southwestern neighborhood of Dora, a suicide bombing was reported at a technical institute for engineers.

Plumes of smoke rose over the capital, darkening an already overcast, chilly day. American Apache helicopters buzzed above the targeted areas as Iraqi emergency vehicles rushed from the bomb sites to hospitals, the Washington Post reports.

He told the BBC their aim was to destabilise the country ahead of general elections due in March.

The attacks follow a relatively quiet month of November. But the government has been warning that the al-Qaeda-led insurgency would continue to stage attacks on government buildings, especially ahead of the expected March election.

But serious questions have been raised about the ability of the security services to protect people - to the extent that the government is trying to play down the violence.

Often the official figures do not quite match the figures that we get from the police and other sources.

"Al-Qaeda has been active in Baghdad recently," Mr Rubaie said.

"The aim is to show the government is unable to protect civilians and its own people and also to deter people from going to ballot boxes," BBC News reports.