Police clashed with several hundred youths in Athens, the Greek capital, as demonstrators staged a second day of protests to mark a teenager's fatal shooting by police in 2008 . 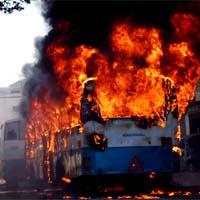 Police fired tear gas and arrested nine people after a group of youths hurled stones at a security cordon deployed to prevent further trouble after demonstrations around the country turned violent at the weekend.

Several high schools and universities in the country were under occupation by students on Monday as part of the protest, Aljazeera.net reports.

Monday's clashes broke out during a demonstration by about 3,000 people, mostly high-school students, through the center of Athens. Several dozen youths at the tail end of the march attacked riot police with rocks, firebombs and firecrackers, smashing some of the bus stops, telephone booths and storefronts not damaged in Sunday's demonstration.

Some demonstrators tried to prevent clashes, shouting at the groups of youths instigating the violence, but to little avail.

"I'm here to play at beating up the police. What's your problem?" one young rioter retorted to a student who admonished him for causing trouble.

Demonstrators also scrawled anti-police graffiti and stenciled a photograph of Grigoropoulos on store windows and walls along the demonstration route, Washington Post reports.

News agencies also report, at Athens University, masked protesters broke into the building and pulled down a Greek flag, replacing it with a black-and-red anarchist banner.

The dean of Athens University was injured when the youths broke into the building, and was in intensive care in hospital, authorities said.

As night fell, about 200 masked demonstrators were holed up in the neoclassical university building, smashing marble chunks off the university steps and ripping up paving stones from the courtyard to use as missiles against the police.

A football match at Athens Olympic stadium between local clubs Panathinaikos and Atromitos was suspended for 30 minutes because of teargas used by police against rioters outside the ground, guardian.co.uk reports.