Two men were hospitalized Sunday and three faced charges after a birthday party in a downtown Baltimore hotel ended violently, with one partygoer shot with a semiautomatic pistol and the suspect allegedly disarmed and badly beaten by others in the crowd. 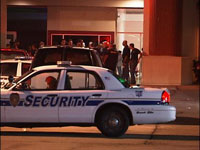 Police initially thought the weapon was an Uzi submachine gun. The weapon was later identified as a TEC-9, a semiautomatic assault pistol, Washington Post reports.

According to Baltimore Sun, 16-year-old West Baltimore youth has been charged as an adult in the holdup of a Hampden liquor store Friday night in which an off-duty police officer shot another robber, a city police spokeswoman said Sunday.

Karim Abdul of the 4700 block Wakefield Road faces charges of attempted armed robbery and other crimes related to the stick-up in the 3700 block Falls Road, said police spokeswoman Nicole Monroe.

The other suspect, whose name police would not release because he has not been charged, was in critical condition at Sinai Hospital. He was shot by an off-duty Northwest District officer.