Nothing is Clear about Thursday's Blast in Syria

Syria's interior minister said a blast hit a Damascus suburb on Thursday, and witnesses said it targeted a busload of Iranian pilgrims causing an unconfirmed number of casualties. 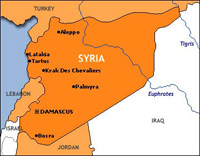 Nothing is Clear about Thursday's Blast in Syria

Interior Minister Said Mohammad Sammour told Lebanon's Al-Manar Hezbollah television station that the cause of blast had not yet been determined.

Iranian diplomats said two Iranians and four Syrians were wounded by the explosion.

The suburb is popular with Iranian and other Shiite pilgrims and is the location of a shrine dedicated to the granddaughter of the Prophet Muhammad.

A private Syrian television station, Ad-Dounial TV, said six people were killed in the blast. Iranian state television also reported six killed, including two Iranian bus drivers. It said the explosion occurred while the bus was fueling up at a gas station near the shrine.

Police sealed off the area and reporters were banned from reaching the site of the explosion.

The blast coincided with a visit to Syria by Iran's nuclear negotiator Saeed Jalili, who was in Damascus for talks with Syrian officials about Iran's controversial nuclear program.

Bomb attacks are rare in Syria, where the regime tightly controls the country and cracks down on any form of dissent, according to the Associated Press' report.