Chief Suspect in Philippine Massacre Turns Himself In

According to the Philippine authorities, the prime suspect in Maguindanao massacre has turned himself in. 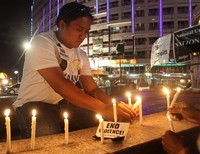 Chief Suspect in Philippine Massacre Turns Himself In

Ampatuan says he is innocent and that he will be taken to Manila to be investigated along with four police officers suspected of taking part in the massacre.

Ampatuan and his militia are suspected of being behind the abduction and killing Monday of a convoy of supporters of his political rival, Ismael Mangudadatu, and at least 18 journalists, Voice of America reports.

It was also reported, the massacre happened on Monday, when a convoy of vehicles used by a rival politician was ambushed.

The passengers were taken to a remote hill region, shot at close range and their bodies dumped in shallow graves.

Mr Ampatuan Jr - mayor of Datu Unsay town - was taken by helicopter from his hometown in the restive Maguindanao province on Thursday morning to a nearby airport. From there he was flown to the capital Manila for questioning.

"The family voluntarily surrendered him and they agreed that he will be investigated," military commander Lt Gen Raymundo Ferrer told reporters, BBC News reports.

"We feel that they have failed to exercise their moral and actual authority over their clan members which is most probably the cause of the incident," said Gilberto Teodoro, who is the administration's candidate for the 2010 presidential elections.

"We don't delve into their culpability under law but their membership in this party ends."

Andal Ampatuan Jr will be brought to Manila to face a formal inquiry and possible criminal charges, Puno said.

"We can assure that the province of Maguindanao is under control and that lawful authorities are in charge, the investigation of the incident is being conducted in earnest and those responsible will be held accountable," he said, Reuters reports.