For the moment the death toll  of an election-related massacre in Philippines equals to 57, including 11  found on Wednesday. 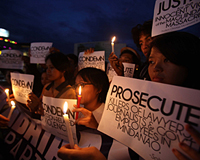 The government has clamped emergency rule on the province of Maguindanao, where the killings took place, and in adjoining Sultan Kudarat province and Cotabato City. Truckloads of troops were brought to the area on Wednesday and armoured cars were parked along highways.

The army disbanded a 200-member paramilitary force under the control of local officials in Maguindanao and sent an extra 500 soldiers, pulled out from a central island in the Philippines, to reduce tension in the area.

The massacre has been condemned around the world. U.N. Secretary-General Ban Ki-moon called it a "heinous crime".

The journalists were accompanying several women of the powerful Mangudadatu clan to file the candidacy of one of the family for the provincial governor's post in elections next year.No men from the family were present, since they believed that women would not be attacked by rivals.

Their convoy was stopped by about 100 armed men, who herded them to a remote hillside and attacked them with M-16 rifles and machetes. Two of their vehicles and many bodies were thrown into a freshly-dug pit and covered with earth by an excavator.

Clan feuds are common in the southern Philippines and the Mangudadatus have been at loggerheads with the Ampatuans, another local family, for months. Datu Andal Ampatuan, the patriarch of the family, has been elected governor of Maguindanao in three previous elections.

The Mangudadatus have blamed supporters of the Ampatuans for the massacre, but no arrests have been made and government officials made no  comments, according to the Reuters report.