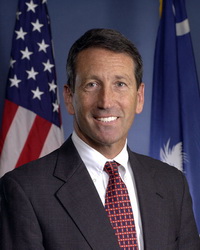 It's up to the state attorney general to decide whether to file criminal charges. Sanford's lawyers have claimed the allegations involve minor and technical aspects of the law.

The second-term Republican governor has been under scrutiny since he vanished for five days over the summer, reappearing to tearfully admit to an extramarital affair with a woman in Argentina he later called his "soul mate."

A series of Associated Press investigations into his travel showed the governor had for years used state airplanes for political and personal trips, flown in pricey commercial airline seats despite a low-cost travel requirement and failed to disclose trips on planes owned by friends and donors.

The State of Columbia newspaper also questioned whether Sanford properly reimbursed himself from his campaign cash, The Associated Press reports.

It was also reported, the resolution seeks to remove the two-term Republican governor, who cannot run for re-election again, for disappearing from the state for five days in June. The married governor subsequently said he had been in Argentina visiting his lover.

House Speaker Bobby Harrell, R-Charleston, has said he does not believe there are sufficient grounds — known now — to remove Sanford.

However, the state Ethics Commission has voted to hear charges against Sanford for three dozen possible ethics violations, involving his use of state aircraft, state-paid transportation and campaign funds. A hearing on those charges is expected early next year, The State reports.

Meanwhile, Delleney’s bill cites Sanford’s dereliction of duty, absence without leave, deceit and cover up, and disgrace of office.

“If character matters, I’ll have the votes. If character doesn’t matter, I won’t have the votes,” Delleney told The Palmetto Scoop last month, when he had planned to use a special legislative session to introduce the bill. “If he is not impeached, we will be making an unfortunate exception for elected officials in South Carolina.”

The State Ethics Commission has found “probable cause” in their investigation of allegations that Sanford used state aircraft for personal travel, violated state requirements by using high-priced airfare, and did not report the use of private aircraft; all stemming from the governor’s five day disappearance in June and his admission of an affair with a woman in Argentina, The Palmetto Scoop reports.