In the Philippines 21 people, including journalists, family and supporters of his political opponent were found dead. Military and police are in searching for a southern governor and his militia. More bodies are expected to be uncovered. 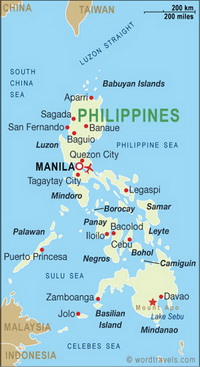 The military in the Philippines says it has deployed more troops and police have set up checkpoints to look for those responsible for the massacre.

The bodies were found shortly after gunmen kidnapped at least 30 people, allegedly to prevent a politician from filing a nomination for upcoming elections, Voice of America reports.

Meanwhile, it was also reported, many victims had been beheaded and buried, authorities said.

"This is a gruesome massacre of civilians unequaled in recent history," said Jesus Dureza, a Maguindanao province official. "There must be a total stop to this senseless violence and carnage."

The convoy of political activists was hijacked by an estimated 100 gunmen as they rode in several vans near the town of Ampatuan, said Army Col. Jonathan Ponce, a spokesman for the 6th Infantry Division. Ampatuan is a city in Maguindanao province, on the island of Mindanao.

The bodies were later found about three miles away. Philippine military troops were searching for at least a dozen more victims who also had been among the group.

"Many of them [were] beheaded, including probably journalists," Ponce said. "Troops are in the area and tracking down those responsible in these killings."

The group included the wife of Buluan township Vice Mayor Ismael Mangudadatu, along with his two sisters, supporters and local journalists.

Officials say they were en route to nearby Shariff Aguak township to file Mangudadatu's nomination papers for the position of governor of Maguindanao province, The Los Angeles Times reports.

In the meantime, International press freedom group Reporters Without Borders condemned what it called "an incomprehensible bloodbath".

"Never in the history of journalism have the news media suffered such a heavy loss of life in one day," the group said in a statement.

Elections can be particularly violent in Maguindano and other parts of Mindanao island.

Both communist rebels and separatist Muslim insurgents are fighting government troops there, and local politics can be dominated by strongmen backed up by private militias.

Vaudine England, former BBC reporter in the Philippines, says both clans in this case are allied to Mrs Arroyo, limiting analysts' expectations of any effective response from the central government, BBC News reports.