A teenager killed in a confrontation with New York City police over the weekend was shot 11 times, the medical examiner's office said Sunday. 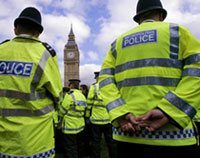 According to an autopsy completed late Sunday, Vasconcellos had three gunshot wounds in the middle of his back, five in his right side and three on his left side, Borakove said. Five police bullets were recovered during the autopsy, she said.

Vasconcellos and two others were spotted leaving a city park in Queens at about 11:30 p.m. Saturday by four officers in an unmarked car. Vasconcellos ran and was pursued by three officers. He then turned and pointed a 9mm semiautomatic pistol at them, Browne said.

"They ordered him to drop the gun, and he did not comply. Three officers fired a total of 14 shots," Browne said, The Associated Press reports.

Leaner Cannon, the mother of Derby Michel, 18, one of the two men accompanying Mr. Vasconcellos, said that he carried the gun for self-defense, not to shoot officers. "He kept it in his book bag; he’s just using it for protection," she said, adding that her son remained in custody on Sunday.

Mr. Vasconcellos was enrolled in a program at Jamaica High School and was going to a house party when the shooting occurred, according to Ms. Boyke-Richards. He had a younger brother and had lived with his girlfriend and her mother in Rosedale, Queens, for about two years, said Ms. Boyke-Richards.

"He was trying to keep away from this, the project, and look where he got killed," said Ms. Boyke-Richards, standing outside the housing project on West 40th Street where Mr. Vasconcellos’s mother lives.

Mr. Vasconcellos wanted to become an R & B singer, Ms. Boyke-Richards said. On the voice mail for his cellphone, he sang a song that he had written, New York Post informs.