Tuesday Somali pirates freed a Spanish trawler and its 36 crew members after getting a $3.3 million ransom. 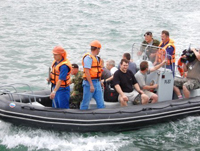 Spain's prime minister did little to deny paying off the hijackers — one reason the lucrative attacks are on the rise.

"The government did what it had to do," Prime Minister Jose Luis Rodriguez Zapatero told a news conference in Madrid. "The important thing is that the sailors will be back with us. The first obligation of a country, of the government of a state, is to save the lives of its countrymen."

Somali pirates attacked two more ships on Monday and still hold about a dozen ships with more than 200 crew, including a British couple who were taken from their 38-foot sailboat last month.

Ali Gab, a self-described pirate, told reporters the hijackers of the Spanish tuna boat Alakrana were paid $3.3 million in ransom, delivered by boat as sailors aboard a nearby warship watched.

After being freed, the trawler steamed away under the protection of two Spanish warships. All crew members were reported to be in good health after more than six weeks in captivity.

Pirate attacks in 2009 already have exceeded last year's total off the Horn of Africa, an international maritime watchdog group reported last month. A total of 306 attacks were reported between January and September, surpassing the 293 incidents recorded throughout 2008, according to the International Maritime Bureau's piracy reporting center in Kuala Lumpur, Malaysia.