Somali pirates on Wednesday seized a cargo ship in the Indian Ocean with 22 crew members on board, the European Union Naval Force said. 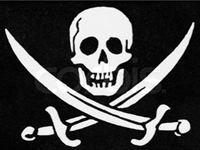 Naval spokesman Cmdr. John Harbour said that there are three Greeks and 19 Filipinos among the crew of the Greek-owned Filitsa. The ship is registered in the Marshall Islands.

A press release by the EU said the ship was taken 400 miles (640 kilometers) northeast of the island nation of the Seychelles. It had been heading for the South African port of Durban but has now turned around and is heading north.

Pirates have increased their attacks since the end of the monsoon season last month. They are now holding at least 12 ships and more than 200 hostages. Three ships have been seized in the last week alone.

Pirates can often command multimillion-dollar ransoms for the release of the vessels they capture, a fortune in impoverished Somalia. The failed state has not had a functioning government for a generation and its lawless coastline provides a perfect pirate haven. Reported by the Associated Press.