Hurricane Ida strengthened to a Category 2 storm on Sunday, and a hurricane watch was extended to the Florida Panhandle as Ida made its way across the Gulf of Mexico. 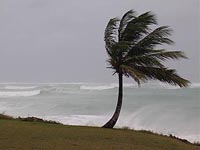 The hurricane watch now stretches from southeastern Louisiana to Mexico Beach, Fla. Forecasters at the U.S. National Hurricane Center in Miami said Ida's winds are now near 100 mph (160 kph), and Ida could get stronger later Sunday.

The hurricane was moving to the northwest near 10 mph (17 kph), and Ida was expected to pick up steam as it moved over open waters in the Gulf of Mexico.

Ida could reach the Gulf Coast by Tuesday, though it was unclear how strong it would be by then.

Earlier Sunday, Ida's wind and rain whipped palm trees in the Mexican resort city of Cancun. Fishermen tied their boats down, though tourists seemed to regard Ida as only a minor setback.

"I figure probably in a couple hours we'll be stuck inside," said Julie Randolph, 40, a social worker from Ormond Beach, Fla., who braved the rain to jog along the near-empty beach.

As winds picked up and intermittent rains intensified Sunday morning, restaurants and nightclubs near the waterfront began covering their windows with large pieces of plywood.

Ida is expected to interact with a weakening cold front over open seas and will most likely be a tropical storm or perhaps a low-level hurricane when it gets to the Gulf Coast.

Parts of the Yucatan Peninsula remained under a hurricane warning, and a tropical storm warning was in place for the western tip of Cuba with heavy rains expected, according to the Associated Press' report.