Iran's opposition organized some of the biggest street protests since June's disputed elections in an attempt to overshadow the 30th anniversary of the seizure of the US embassy in Tehran. 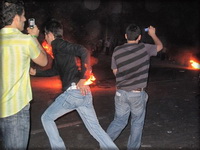 Thousands of demonstrators poured into the capital to defy riot police, revolutionary guards and Basij militiamen wielding clubs and kicking protesters, as well as firing teargas and – according to some unconfirmed reports – bullets.

Video footage on the internet showed supporters of Mir-Hossein Mousavi, who claims he won the presidential race, stamping on images of Ayatollah Ali Khamenei, Iran's supreme leader, and denouncing him as a "murderer". Others criticised the president, Mahmoud Ahmadinejad. Many wore wearing green scarves, ribbons or wristbands, guardian.co.uk reports.

Iranian police have clashed with opposition demonstrators. A government crackdown on the anti-government demonstrators turned violent in some places.

Anti-government protesters were dealt with by force, as a government crackdown turned violent.

Government backed demonstrators at the initial rally outside the old U.S. Embassy in Tehran shouted "Death to America" and "Death to Israel." A pro-government speaker also addressed the crowd, praising the Islamic Republic, the 1979 Islamic Revolution, and it's founder Ayatollah Ruhollah Khomeini.

Meanwhile, in Tehran's nearby Hafte-Tir Square, thousands of opposition demonstrators shouting anti-government slogans, including "Death to the dictator", and "Down with (Supreme Leader) Ayatollah Khamenei" were met by anti-riot police and Basij militiamen waving batons and firing tear gas. Eyewitnesses report numerous injuries and dozens of arrests, Voice of America reports.

It was also reported, outside the former U.S. Embassy, thousands of people waved anti-American banners and signs praising the Islamic Revolution. As in past years, many were students bused in from outside Tehran.

The main speaker, hard-line lawmaker Gholam Ali Haddad Adel, denounced the United States as the main enemy of Iran. He did not mention the talks with the West, including the United States, on Iran's nuclear program.

But he labeled opposition leaders as dangerous for the country, saying they claim to support the ideals of the Islamic Revolution but aid Iran's perceived enemies.

In Washington, Obama noted the anniversary of the takeover of the U.S. Embassy and urged the two countries to move beyond the "path of sustained suspicion, mistrust and confrontation."

The hostage crisis "deeply affected the lives of courageous Americans who were unjustly held hostage, and we owe these Americans and their families our gratitude for their extraordinary service and sacrifice," Obama said in a statement, The Associated Press reports.