The tropical storm caused severe flooding in parts of central Vietnam, depriving people of lives and homes, according to disaster officials report on Tuesday. 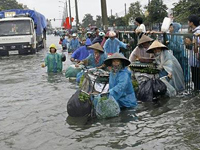 Several villages in neighboring Binh Dinh province suffered the worst flooding in four decades after the Ha Thanh River surged over its banks.

Local authorities asked the central government to send helicopters to rescue people who were still trapped on rooftops a day after the storm, which lost force as it moved inland.

Mirinae hit the Philippines with typhoon strength over the weekend, killing 20 people before losing strength as it moved across the South China Sea toward Vietnam.

Both Vietnam and the Philippines were still recovering from Typhoon Ketsana, which brought the Philippine capital of Manila its worst flooding in 40 years when it struck in September. Ketsana killed 160 people in Vietnam.

In the Philippines, Ketsana and two later storms killed more than 900. Some 87,000 people who fled the storms were still living in temporary shelters when Mirinae struck.

In a separate incident in northern Vietnam on Monday, one woman drowned and five others were still missing after a whirlwind toppled two boats in the northern province of Quang Ninh, disaster official Le Thanh Nam said.

The authorities engaged soldiers in  rescue operations, according to the Associated Press' report.