Somali pirates demanded $7 million for the release of a British couple whose yacht they hijacked off the coast of Africa. 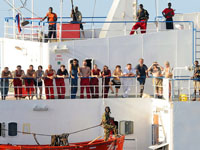 Paul and Rachel Chandler were headed to Tanzania in their boat, the Lynn Rival, when a distress signal was sent Oct. 23. The British navy found their empty yacht on Thursday, and both have been in sporadic contact with the British media since.

On Friday, a Somali pirate claiming to speak on behalf of the group holding the couple said they planned to move them to another hijacked ship with other hostages anchored off the eastern coast of Somalia.

British officials held a meeting on the hostage situation Friday in the government's crisis briefing room, known as COBRA. The Foreign Office said a team from across several government departments was involved.

Both the Foreign Office and Ministry of Defense declined to comment on whether any potential rescue was under consideration.

Over the past two years, France and the U.S. have used military force to rescue hostages from Somali pirates but all cases have involved small vessels — either sailboats or a lifeboat.

The high-seas hijackings have persisted despite an international armada of warships deployed by the United States, the European Union, NATO, Japan, South Korea and China to patrol the region.

To launch a military operation on the pirates would be tactically challenging, Davis said. Getting on board a large container ship, populated by well-armed pirates is a daunting proposition — and it could also transform what pirates see as a business transaction into something more hostile, he said.

The Chandlers' family has said the couple aren't rich and that their yacht, the Lynn Rival, is their main asset. Douglas Guilfoyle, a lecturer at University College London, said that could pose a problem.

Somalia has not had a functioning government for 18 years. The multimillion-dollar ransoms the pirates regularly collect are a strong lure for young gunmen in a country where nearly half the population is dependent on aid.