Philippines were knocked about by a new typhoon on  the last day of October 2009. It was the fourth disaster for this month  which has deprived many people of lives and homes. 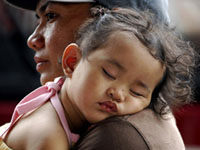 Typhoon Mirinae, with winds of 93 miles (150 kilometers) per hour and gusts of up to 115 mph (185 kph), slammed into Quezon province northeast of Manila around midnight Friday. It quickly swept westward out to sea south of the capital and weakened into a tropical storm Saturday afternoon.

Mirinae appeared to be heading next toward Vietnam.

Back-to-back storms in late September and early October killed more than 900 people, and a third storm then threatened the northern Philippines before veering toward Japan.

According to police's report six people, including a 12-year-old girl, drowned in a flash flood in Laguna province's Pagsanjan township, south of Manila. Four others were missing in floodwaters in other towns.

Nearly 95,000 people who fled during those two earlier storms were still housed in temporary shelters when Mirinae struck, the national disaster agency said.

The Associated Press has contributed to the report