After a collision between a Coast Guard plane and a Marine Corps helicopter, the U.S. Coast Guard and Navy are searching for nine people off the Southern California coast. Seven people were on board the plane, a C-130, and two were aboard the helicopter. A pilot reported seeing a fireball near where the aircraft collided, the FAA says. 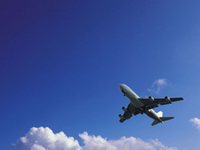 Representatives of ousted President Manuel Zelaya have reached an agreement with the interim government that could help end the months long dispute over Honduras' June 28 coup, and possibly pave the way for Zelaya's reinstatement. The Organization of American States announced the deal late Thursday but did not release a text of the accord, in which Zelaya appears to have agreed to throw his fate into the hands of a congress that has largely supported interim President Roberto Micheletti, USA Today reports.

Coast Guard Capt. Thomas Farris said at a morning news briefing, “We continue to search with every asset we have available.”.

Farris said four Marine aircraft were conducting training missions in the area prior to the collision, which was reported at 7:10 p.m.

The Coast Guard C-130 had been conducting a rescue mission, looking for a person who had reportedly tried to row to Catalina Island in a dingy.

Three helicopters were searching in the area Friday morning along with the Coast Guard cutters Edisto, Petrel and Blackfin and several smaller boats. Three Navy ships also were participating in the search.

“Search conditions last night were very good,” Farris said. “Most of you saw it was near a full moon, very high. The visibility was good,” San Diego Union Tribune reports.

It was also reported, U.S. Coast Guard Lt. Josh Nelson confirmed that the collision occurred and said a large rescue team from the Navy and Coast Guard were in the area

"We are throwing everything we can at this right now. We are looking for survivors," Nelson said. "They have seen debris is in the water."

Weather conditions were aiding the search, he added.

"The winds are calm, the seas are calm and we are using night-vision goggles," Nelson said. "The search conditions are ideal," CNN reports.