They say that the town of Kaniguram - one of the largest towns in the area - is also the "operational centre" of the Pakistani Taliban. 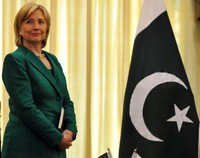 The army says its offensive against the militants was "making good progress".

But a US-based rights group warned of "catastrophe" if aid is not allowed in to help civilians trapped in the area , BBC News reports .

In the meantime, Obama 's administration has reportedly rushed hundreds of millions of dollars in arms, equipment and high-tech sensors to Pakistani forces in recent months to support military operations in Taliban-controlled areas along the border with Afghanistan.

It was also reported, Wednesdayn a dinner toast to Pakistani President Asif Ali Zardari, Clinton tried to address the military's battle against Taliban insurgents as well as the U.S. development assistance she came here to highlight. "Those who your brave soldiers are fighting against as we meet here tonight are destroyers, not builders," she told guests at a gathering Zardari hosted in her honor at the presidential palace.

Just a few hours earlier, at least 100 people were killed and 200 were injured when a powerful car bomb tore through a crowded market in the northwestern city of Peshawar. Hospital officials said two-thirds of the dead were women and children.

Having broadcast images of Clinton's arrival earlier in the day, Pakistani news coverage quickly shifted to pictures of the carnage, highlighting the difficulty of her mission.

The blast occurred in the Mina Bazaar, a busy market in Peshawar's larger Qissa Khawani Bazaar. Relief workers and government officials said the explosion badly damaged six four-story buildings surrounding the bazaar, a historic site full of dark stalls and dusty treasures. One of the buildings collapsed, as did a nearby mosque, officials said , The Washington Post reports .